When you need to get out of town, head north to Santa Barbara to hit the beach, eat too many tacos and let your inner wine snob run wild

So you're sitting at a cafe in West Hollywood and some momager is lamenting about her kid not landing a role, when you come to the realization that you need to get out of LA for a night. You have a car and its ready and willing to take you anywhere you want to go. We don’t know about you, but our trusty steed is a Chevy Cruze. She has wifi, a caramel interior and a bangin’ sound system. Her name is Constance and Constance wants to go to Santa Barbara. And how can we say no to that face?
We set off bright and early, opting for the scenic route on Highway One. Adhering to the mastered art of any good road trip, we stop for human fuel before journeying too far. Luckily, Cafecito Organico in Malibu at Point Dume is an excellent choice for a coffee and pastry before jetting up the coast. Plus, you might luck out like us and run into a sleepy celebrity like Seth Rogen—yeah, we totally saw Seth Rogen. Stars ... they need human fuel just like us!
Get Citizine Updates Here 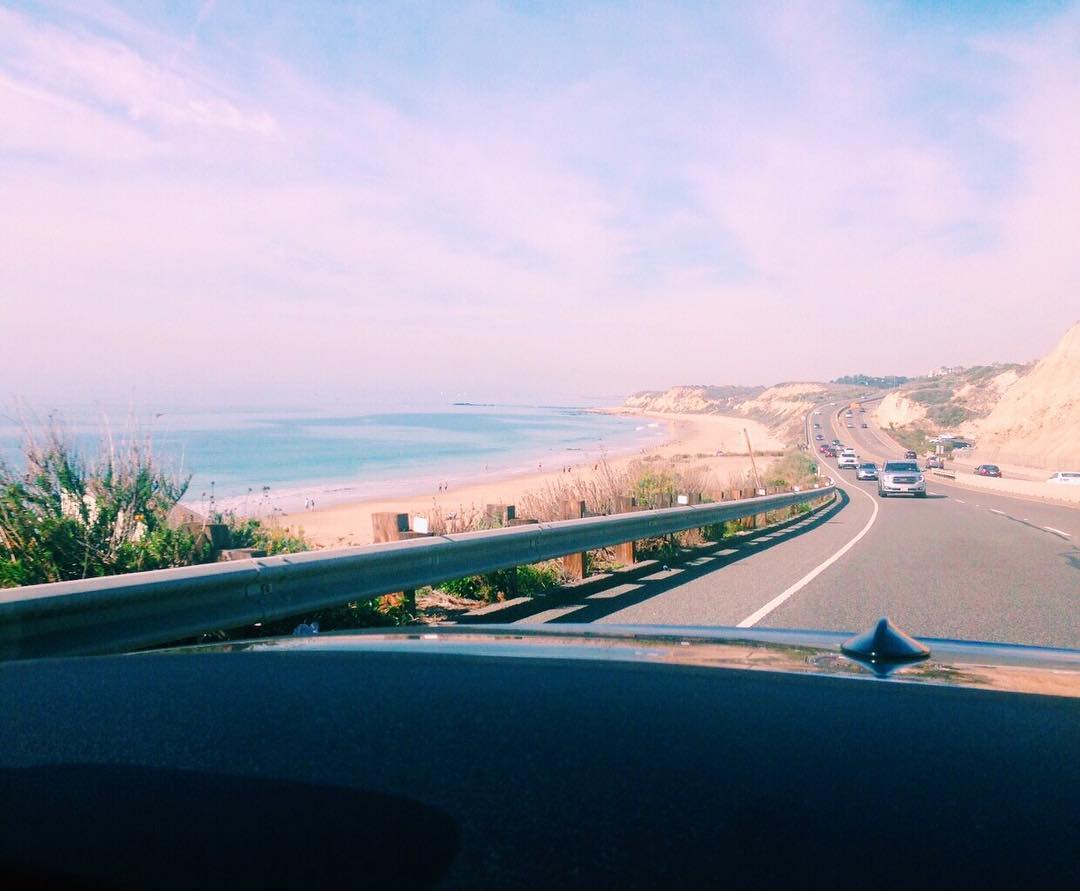 Caffeinated and starstruck, we pummel down PCH, cruising cozily between the vast Pacific and the Santa Monica Mountains. Just under two hours, Malibu, Oxnard, Ventura and Carpinteria later, we have arrived in Santa Barbara.

Our home for the night is a property with both taste and a sense of humor. Beyond the front desk where Jem and the Holograms plays on loop, a massive robot mural and a color coordinated library are the main focal point. Shimmery blue mermaid wallpaper lines the guestrooms and the communal kitchen is always stocked with coffee and tea, plus local booze for purchase. The Wayfarer is the trendiest and most upscale hostel we’ve ever seen. Not to mention, it’s in the perfect location for exploring the small city, smack dab in the middle of theThe Funk Zone, a five minute walk from Stearns Wharf, State Street and Santa Barbara Train Station. 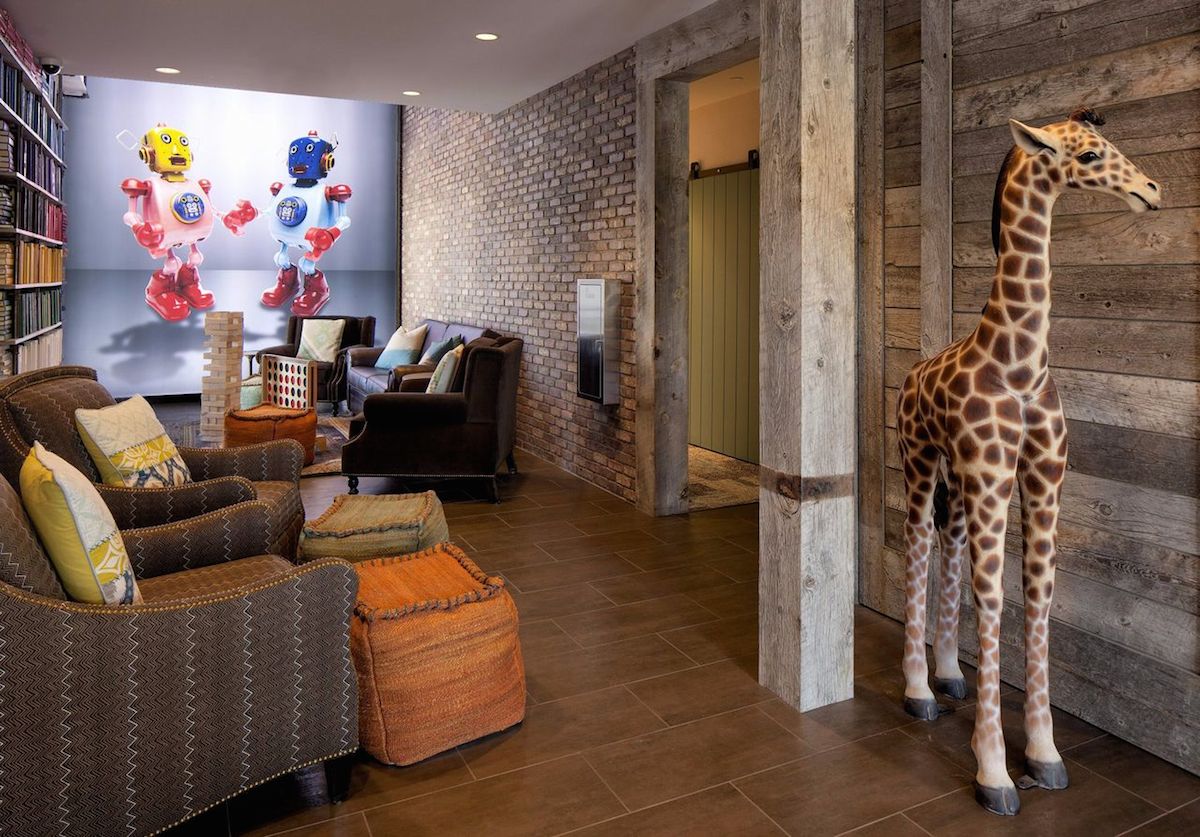 Lobby at The Wayfarer 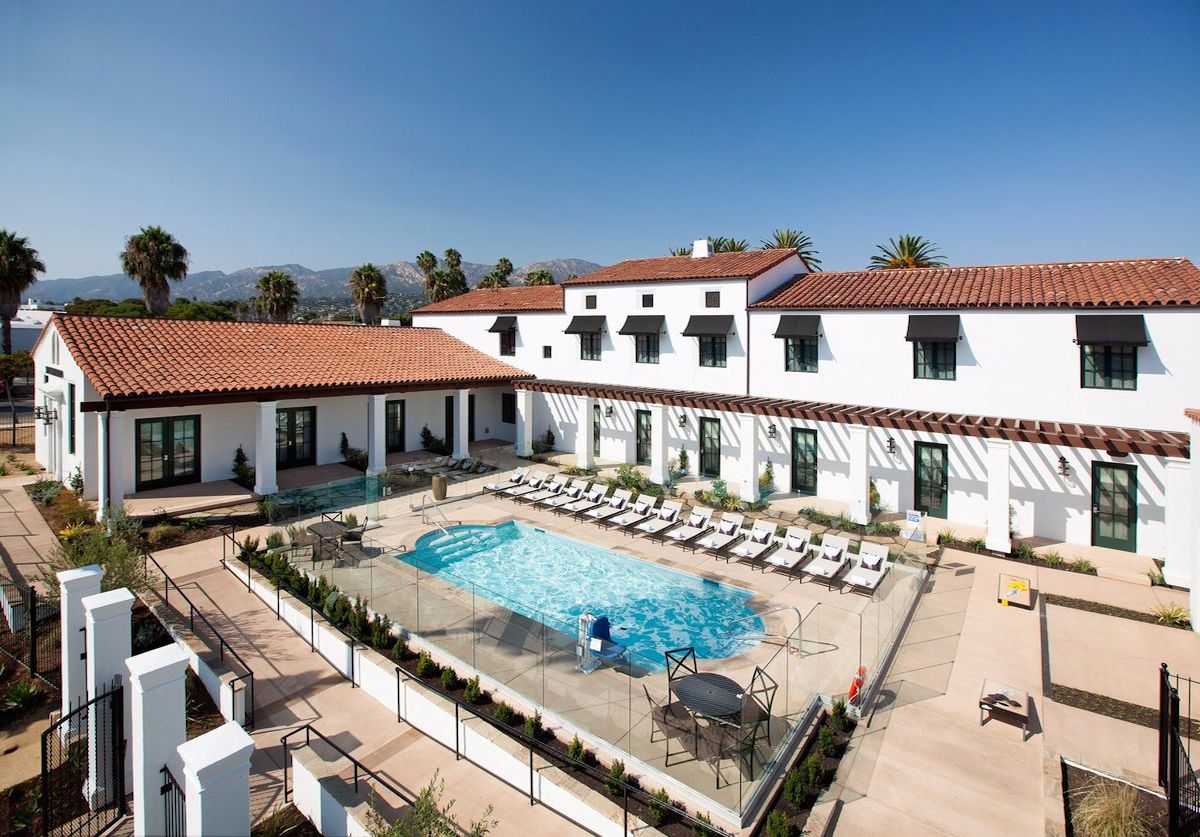 Images courtesy of The Wayfarer

After the ride in, we’re eager to get some endorphins in the Santa Barbara sun. With a tip-off from our friends at Visit Santa Barbara, we mosey down to Cabrillo Blvd and rent beach cruisers from Wheel Fun Rentals. Zipping down the bike path is the perfect way to get a feel for Santa Barbara. We challenge you not to smile till your cheeks hurt as you traverse the coastline past beaches, volleyball courts, surfers, cafes and Stearns Wharf, the beautiful pier that has the historical tendency to burn down or collapse ... but don’t worry, you’re safe until the big one hits. 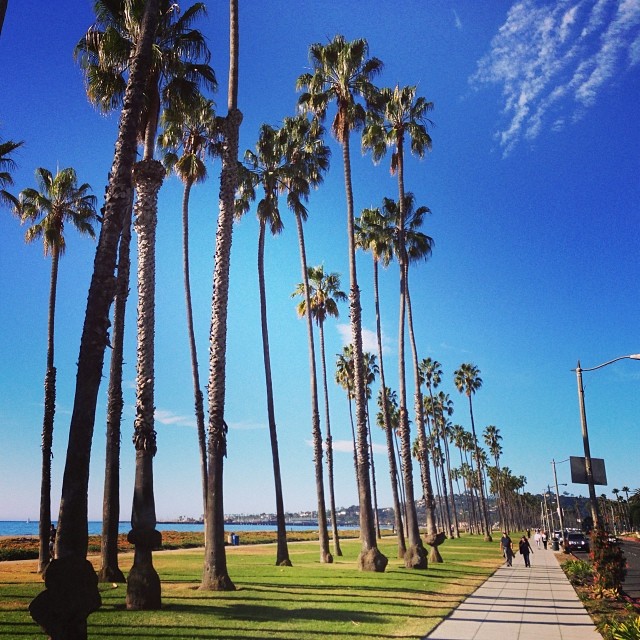 An average day on the Cabrillo Bike Path. Image courtesy of @sketch

After returning your bikes, you’ll likely look into the eyes of your traveling companion(s) and know: it’s taco time.

Where dreams come true. This standalone homestyle Mexican staple isn’t a California historic landmark, but it should be. Don’t let the line (which sometimes extends down the block) deter you from the tortilla lady within. As you pick and choose between the numbered items on the chalkboard, an overwhelmed and indecisive voice inside your head might ask: “Do I pick the Rajas or the Quesadilla con Chorizo? Do I get the Super Rica Especial and the Pechuga Suiza and then splurge on guacamole?” The Answer: You get each and every delicacy that catches your eye … and bring plenty o’ cash. (They don’t take cards.) 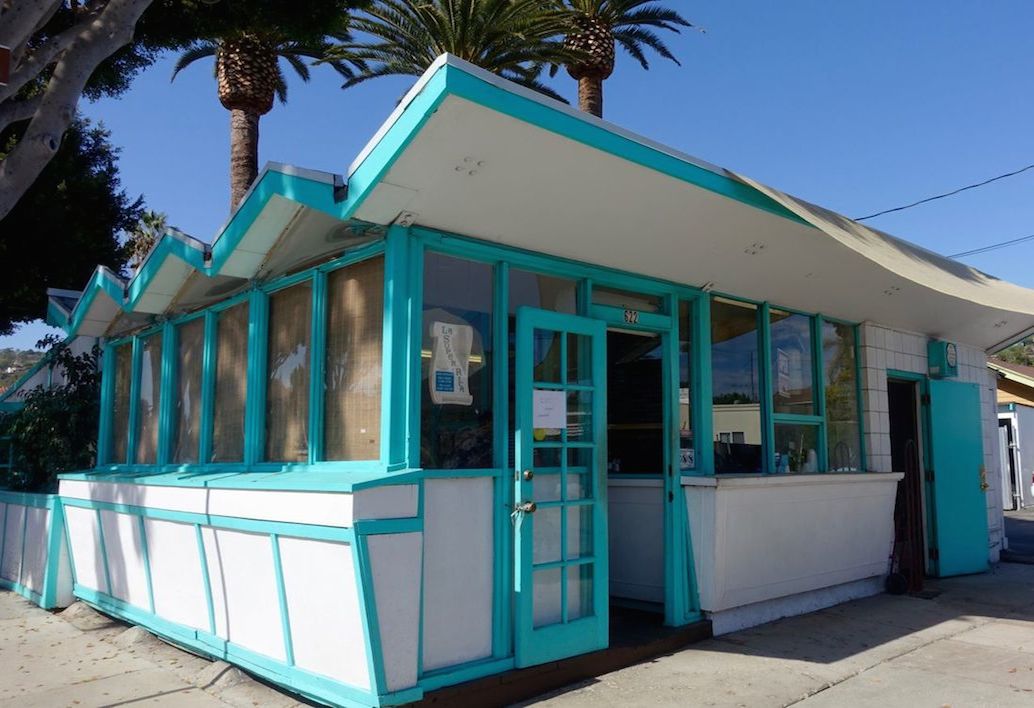 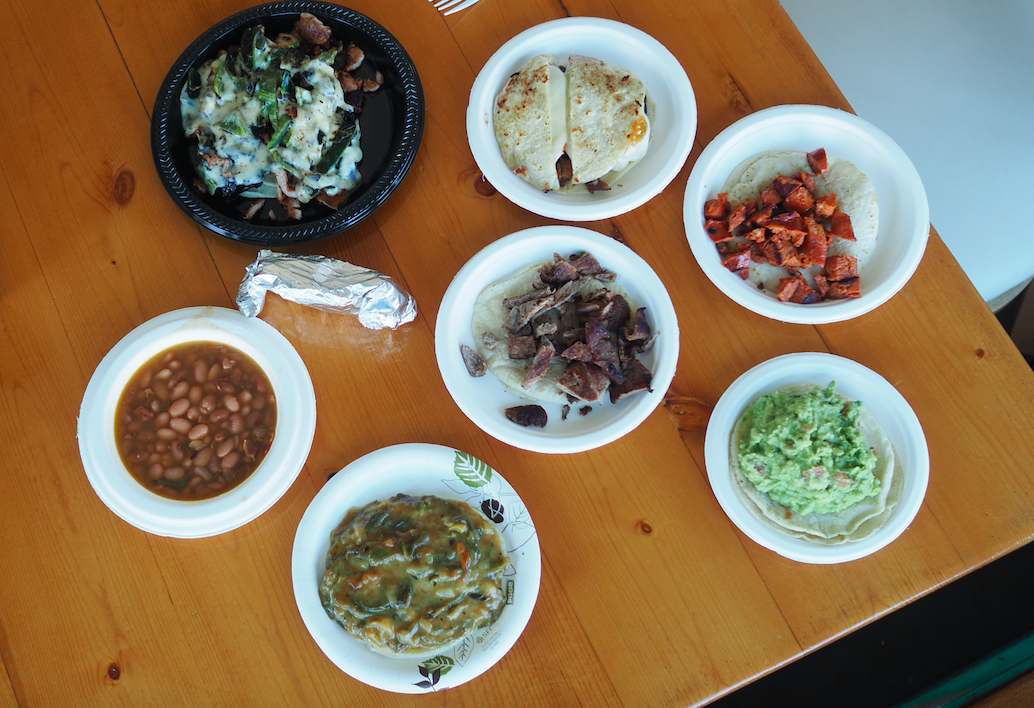 Satisfied and a bit sluggish from overeating, our Chevy Cruze carries us up the hills to where it all began: The Mission. The Old Santa Barbara Mission was built in 1786 by Franciscans who enlisted the aid of the local Chumash Indians who may or may not have willingly complied. Stepping into the mission, you may cross paths with friars, who still live and work on the grounds. The mission’s museum, garden and cemetery allow you to dive deep into California’s Spanish, Mexican and Native American histories. Walking the grounds really feels like stepping back into another time and place where everyday mentions of the olive garden are not in reference to Bottomless Breadsticks. 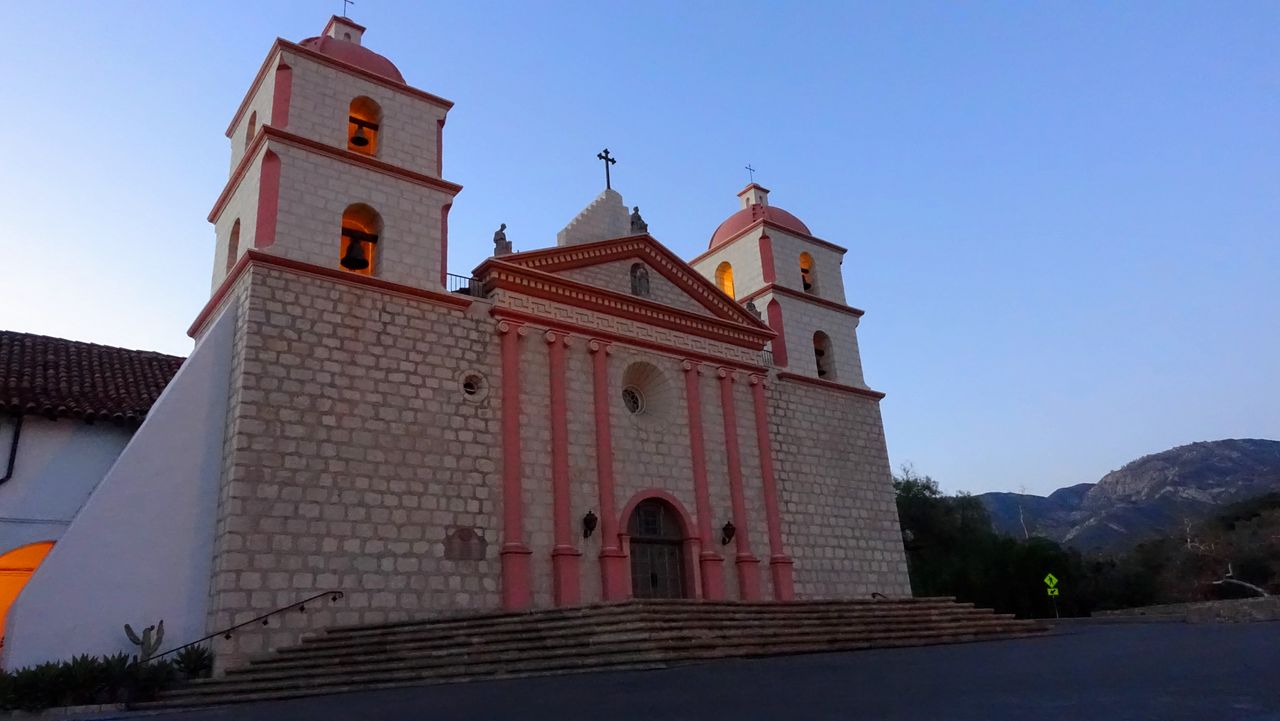 The Mission. Image by Alethea Cho 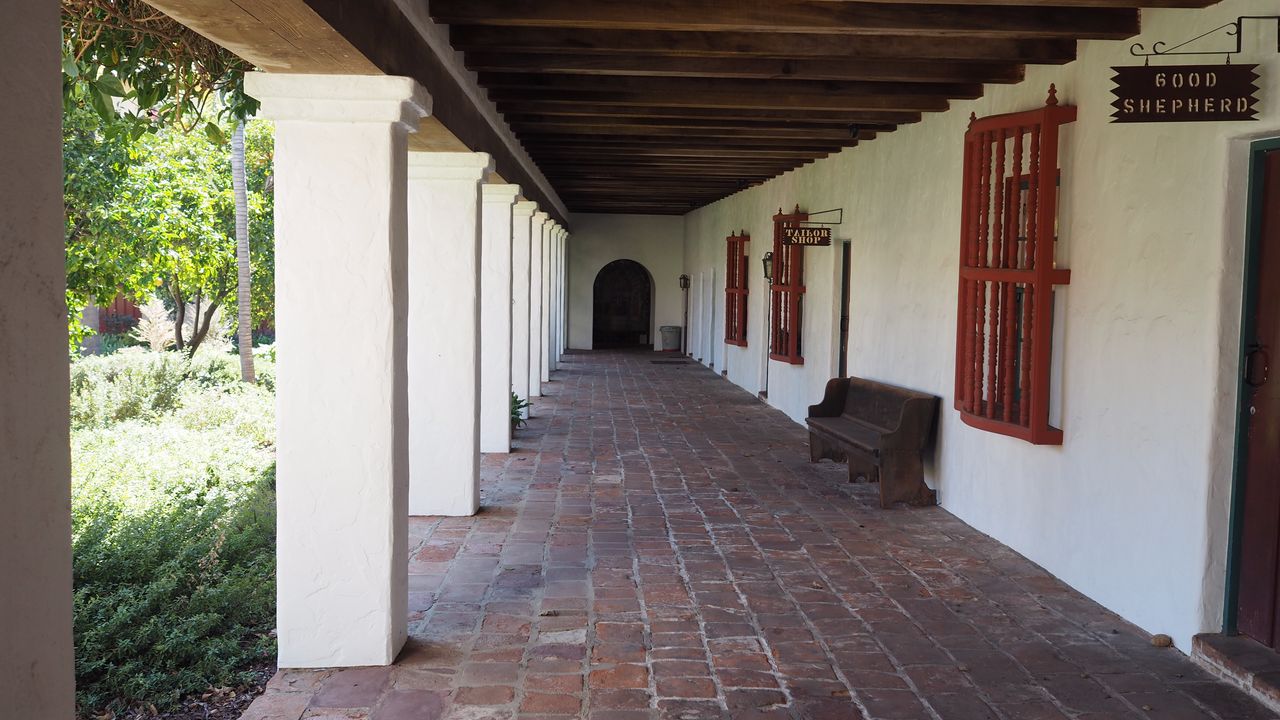 At this point, we needed a cool down from all the covered up colonization, so we went for a quick dip in the Wayfarer pool before our appointments at the Himalayan Salt Cave in Downtown SB.

You already know about poké, aerial yoga and Stranger Things, but is 200 million-year-old Himalayan Salt on you trend radar yet? As its name implies, this spa is crazy about Himalayan salt, and soon you will be too. Cook with it, meditate in a room full of it, soak in a bathtub full of it … the possibilities are endless. At Salt Cave, the pink crystals come in every form imaginable, from soaps and lotions to lamps and shot glasses. But the main event is the serene salt cave, which is infused with micro-salt particles that are as stress relieving as your therapist in West LA. Spend 45 peaceful minutes aligning your chakras in the cave's depths. Afterwards, keep the zen going by buying your lover, significant other or mother a nice soap or salt scrub. 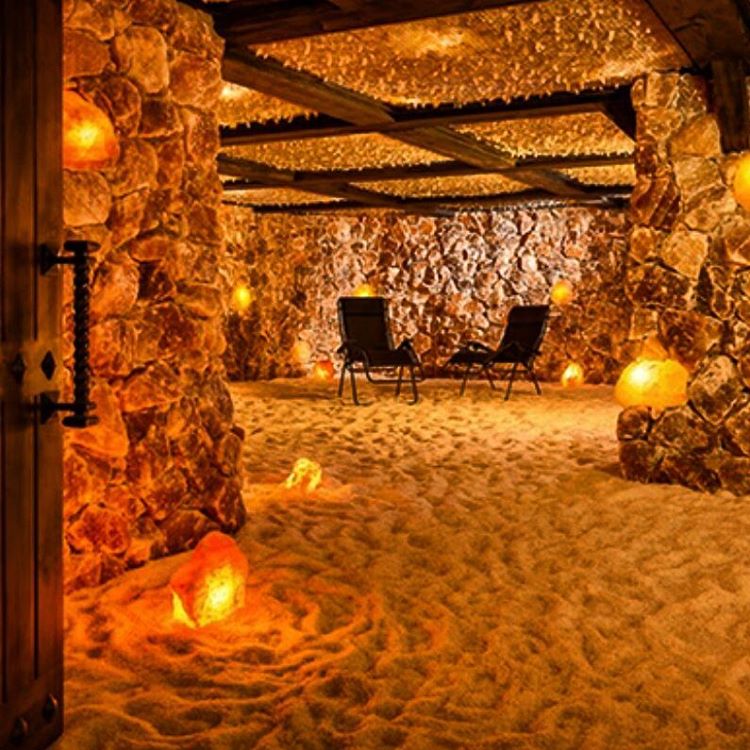 We emerge rejuvenated onto State Street, the main drag of downtown Santa Barbara where you should definitely pop into the original McConnell's Fine Ice Creams for a cone of Turkish Coffee or Olive Oil and Almond, but we were feeling a bit more mischevious. We looked at our watches and noticed that it was wine o’clock.

Santa Barbara is located between the Pacific Ocean and the Santa Ynez Mountains, creating a Mediterranean climate perfect for winemaking. But long gone are the days when you need to trek into the hills to taste the best wines of the region. Instead, stroll along the urban wine trail, a collection of 29 wineries and wine tasting rooms located all over downtown Santa Barbara. Each tasting costs about 10-15 dollars per flight, making it super affordable for you to unleash your inner somm. The hours of operation vary from tasting rooms to tasting room, but they are generally open from noon-till sundown, leaving ample time for day drinking. We sampled flights in the Funk Zone at The Valley Project, Pali Wine Co. and Area 5.1 Winery. 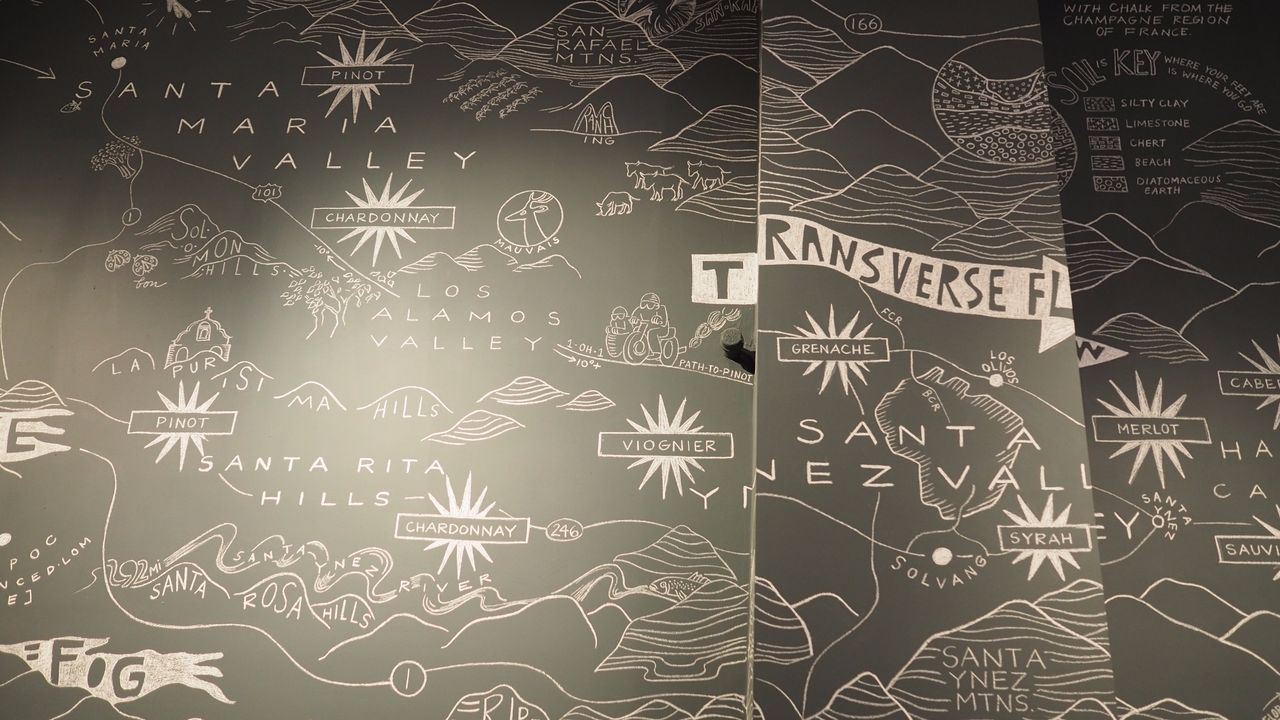 This restaurant in the heart of the Funk Zone might be the hardest place to get a Saturday night dinner res in town, and for good reason. The Lark's creative twists on Central Coast cuisine transport taste buds to places you won’t expect. The Kabocha squash and seared ahi entree, for instance, was a flavor profile our Angeleno palates had never before experienced, and it was delicious. Plus the drinks, service and décor are the triple threat that Justin Timberlake wishes he was. 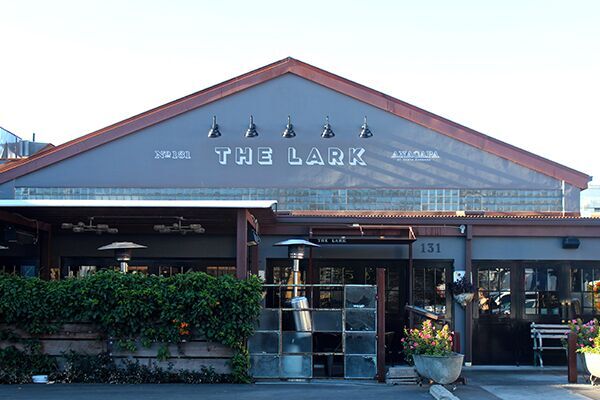 The Lark SB in the The Funk Zone 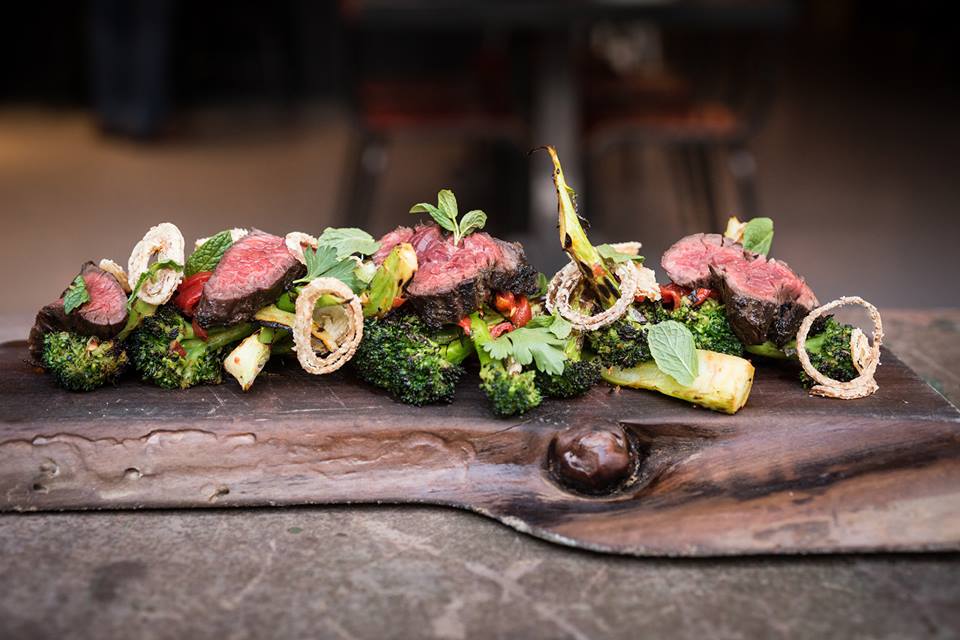 Images courtesy of The Lark

If your inner energizer bunny is still marching, or if you could just use a beachy nightcap, get your Tiki on at Test Pilot. The kitschy Tiki glasses and totem poles are really vessels for well-balanced craft cocktails and smoothies that pack a punch. The bartenders are knowledgable and friendly and on weekends, it’s the fun kind of crowded. This is also the perfect bar to pop into for happy hour. 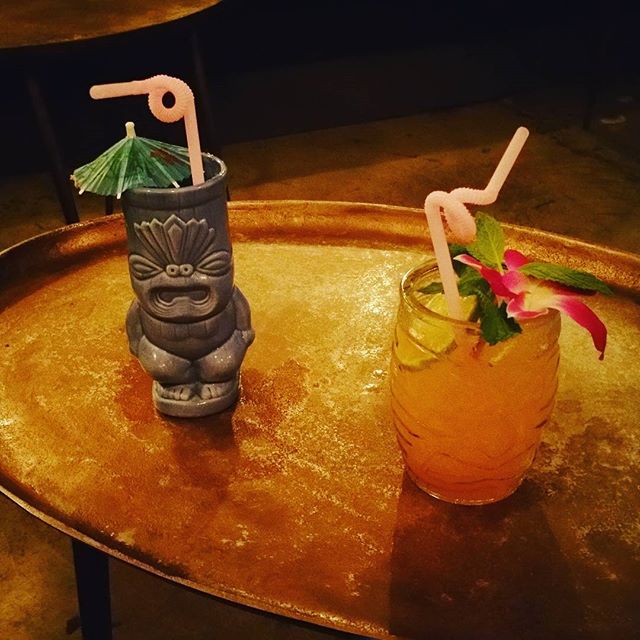 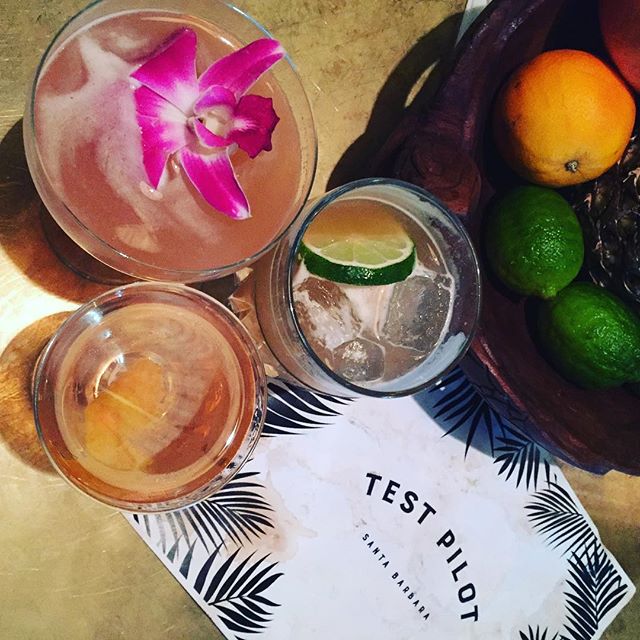 After a few drinks too many, we stumble back down the street to The Wayfarer, wave good evening to Constance in the parking lot and fall into a sweet, deep slumber.

The next morning, breakfast was in order after all the wine and Tiki cocktails. So we checked out of the Wayfarer, jumped in the Chevy and headed up State Street to Jeannine’s. Whether you order pancakes, eggs benny or a breakfast quesadilla, if you sit on the outdoor patio in the arcade, you’ll feel like you’re on vacation—and you are! 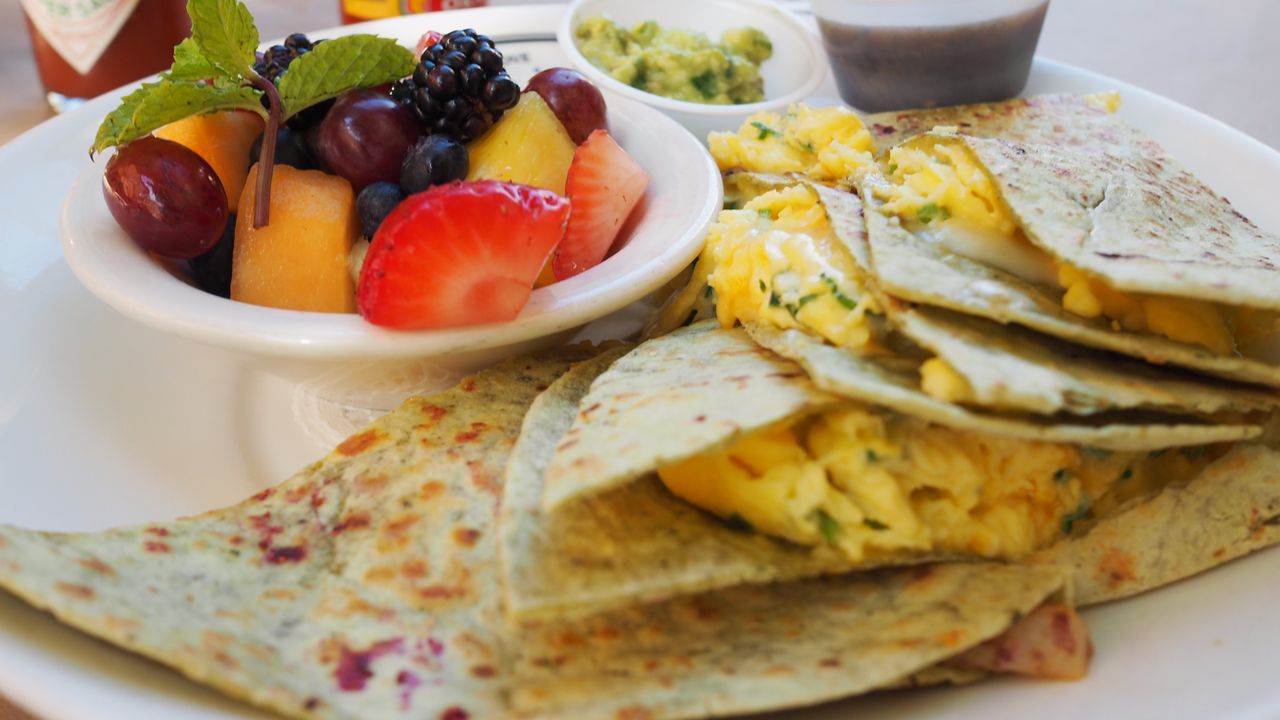 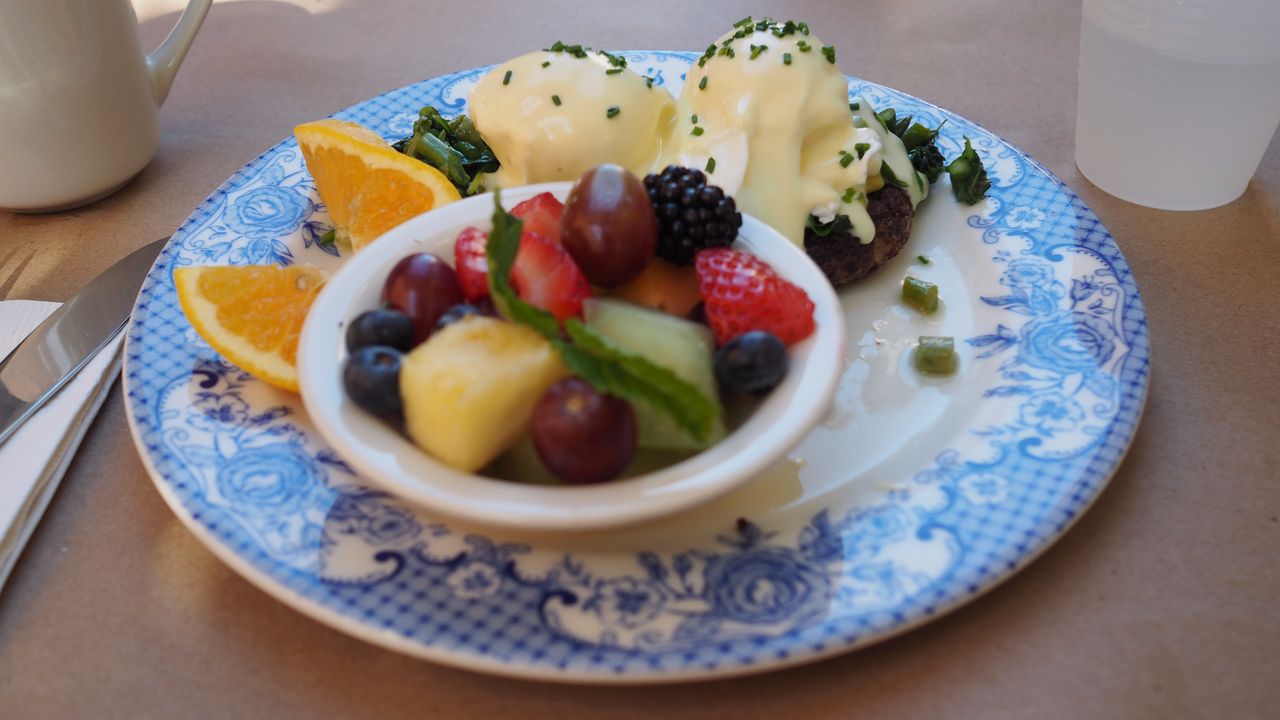 Before getting back on the road for Los Angeles, we are due for a dose of art and culture, so we head to the Santa Barbara Museum of Art. With collections ranging from ancient to contemporary, there is something for every art lover here. The museum is currently celebrating its 75th anniversary with Highlights of the Permanent Collection, which features exciting acquisitions of modern and contemporary art, photography and more. 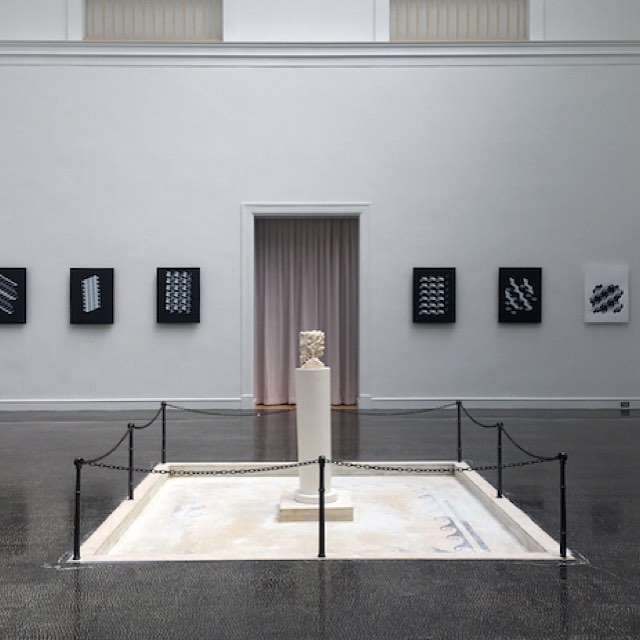 Is this the most beautiful courthouse California has ever known? Yes, yes it is. Climb to the top of the tower for a view of entire city. Take particular note of the sprawling terracotta tile roofs that make the landscape oh so Spanish-California. The view from the top is the perfect way to say solong to sunny Santa Barbara. 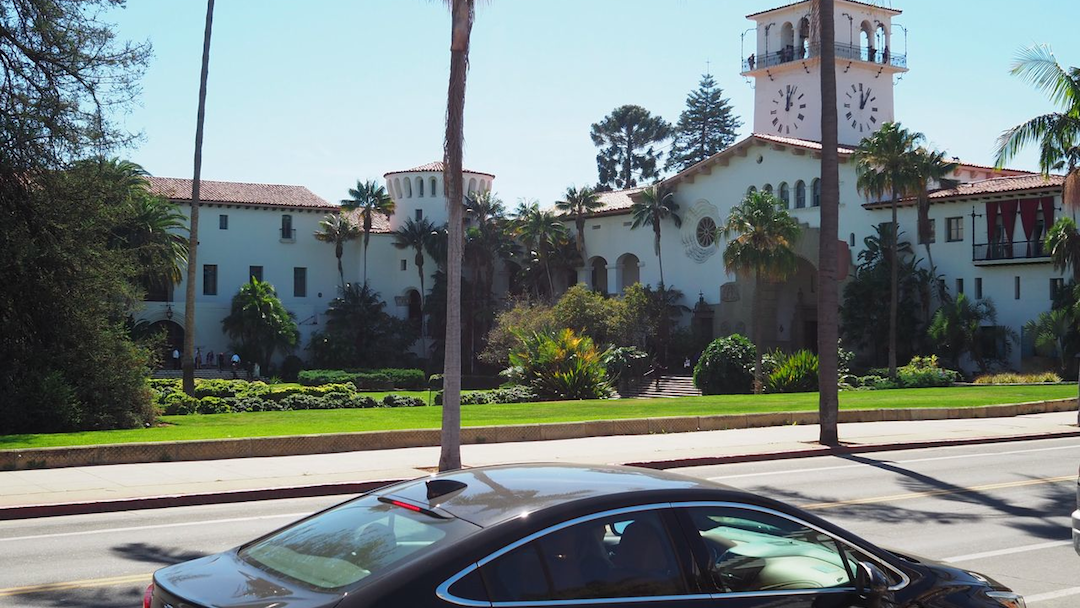 Constance at the Courthouse. By Melissa Karlin 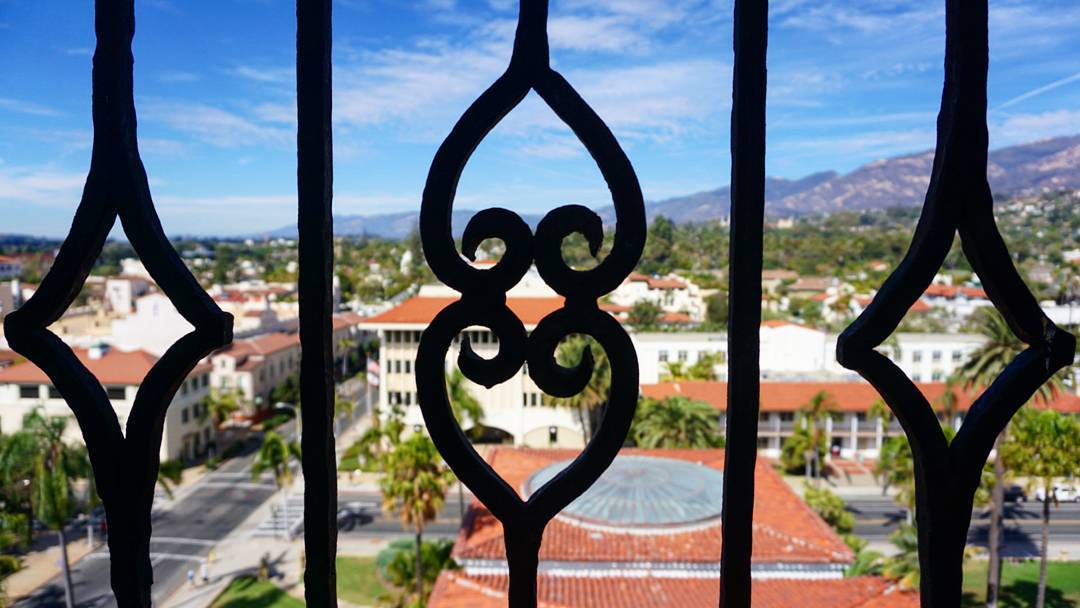 Views from the top. Courtesy of @konsti_pie

Oh coffee, what would we do without you? Luckily for all of us, French Press has been a local favorite since 2009. Check out the OG location on state street as well as other locations around town for your cold brew fix before hitting the road back to reality in LA. It's been real, Santa Barbara. 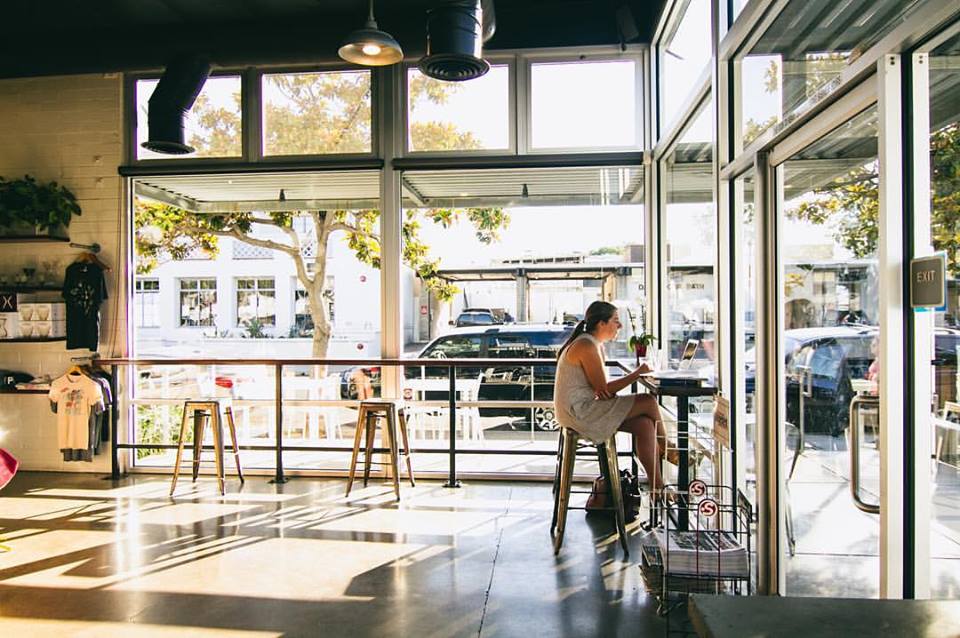 Images courtesy of The French Press 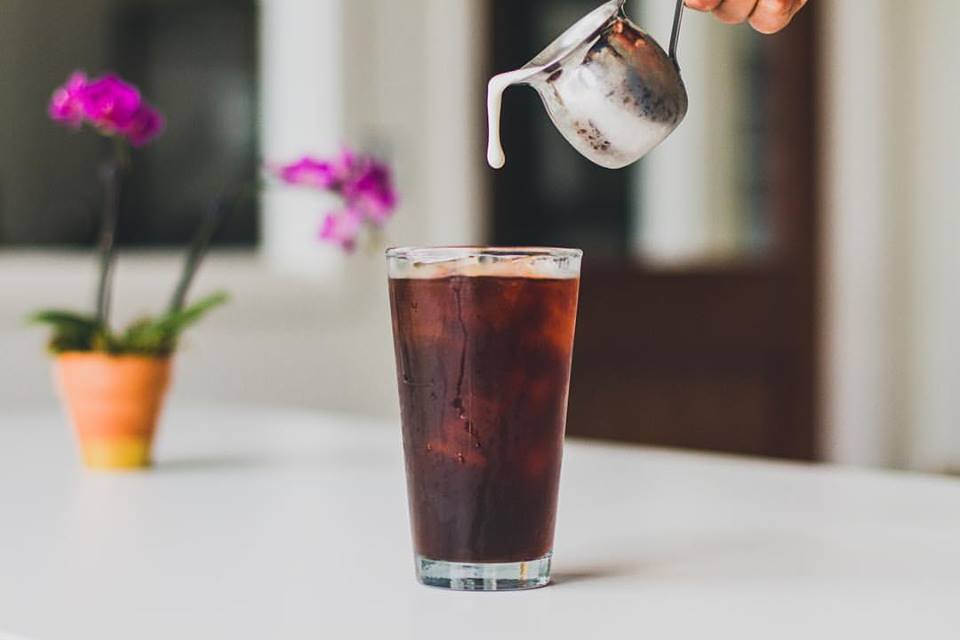 Oh cold brew, what would we do without you?

*This story was co-written by Arden Shore and Melissa Karlin

Melissa Karlin is a writer, photographer and professional social butterfly based in Los Angeles, California. Follow her misadventures @informedwanderer.