Seafood In LA With The Chef Of Rappahannock Oyster Bar

Are you Team Mayo or Team Butter for your lobster roll?

Rappahannock Oyster Co has been dealing their namesake delicacie since 1899, when co-owners' Ryan and Travis Croxton's great-grandfather first leased river bottom in Virginia. "In 2001, when the oyster leases came up for renewal, we said ‘what the heck’ and gave it a shot," the Croxtons told Citizine. "17 years later, it’s a real comeback story. The Chesapeake Bay oyster industry went from near extinction to being the number one on the East Coast, and our little company now produces more oysters than did the entire Chesapeake Bay in 2001." Rappahannock has gone far beyond just farming oysters today. The company has restaurants in Virginia, Washington DC, South Carolina, and most recently, one in Los Angeles at ROW DTLA.
Yet, even with the success of their restaurants, Ryan and Travis see themselves as farmers first. "For us, it always goes back to how you source your ingredients. We want to support people who are doing it right (that means with a conscience and with flavor)" the co-owners said. "And as a company that tries our hardest to do it right, we take immense pleasure in highlighting people in our restaurants who do the same. And you can taste it." Those values were also reflected in the process for deciding to come ashore at ROW DTLA as Rappahannock Oyster Bar's first West Coast location. "After seeing the location, hearing about their plans, looking at the partners they’d already pulled together…it was an easy decision," they said. "There’s just nothing like it. We’re a company built on restoration and revitalization. The ROW is doing just that—it was just a great fit." 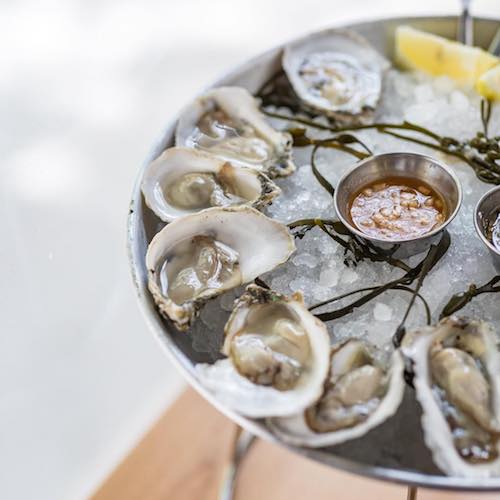 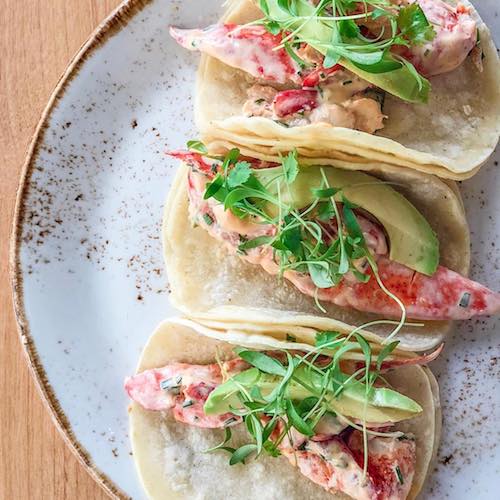 Though LA is some 3000 miles away from the Chesapeake Bay, Ryan and Travis have ensured their concept of flavor with conscience is found in every dish by putting Nick Erven in charge of the kitchen. "I was in the process of closing my restaurant [Erven] and Anthony the GM called me asking if I knew of a chef looking for a job. I said, 'Yes. Me. I need a job,'" Erven told Citizine. "Anthony and I had worked together many years before, so I was super excited to reunite with him. I flew out to see the oyster farms and tour their other restaurants. After meeting the owners, I was super excited to join the team."
"I think that Rappahannock is unique because of the care that the company takes in raising and harvesting the oysters," Erven continued. "They are so passionate about the product and the care that they give the oysters. This is one of the reasons I wanted to be involved. There is no disconnect between the farmer, chef, and diner. It's really exciting what we are doing." It also doesn't hurt that seafood is one of his favorite ingredients to work with, along with yuzu, bitter greens, eggplant, and legumes. "It is really delicate and you can't do too much to it or you will ruin it," he added. "Simplicity is the name of the game."
Both Erven and the owners share an appreciation for the seafood that the North American waters have to offer. "Both coasts seem to appreciate how lucky they are to be so close to so much great seafood," the Croxtons added. "It shows on the menus. We’re still at the kid-in-a-candy-store stage with all that the West Coast has to offer." Though Nick still sees seafood—and oysters in particular—as engrained in East Coast culture, he says that, "we have an incredible array of seafood on the West Coast. Santa Barbara uni, spot prawn, dungenness crab, Salmon, halibut etc." 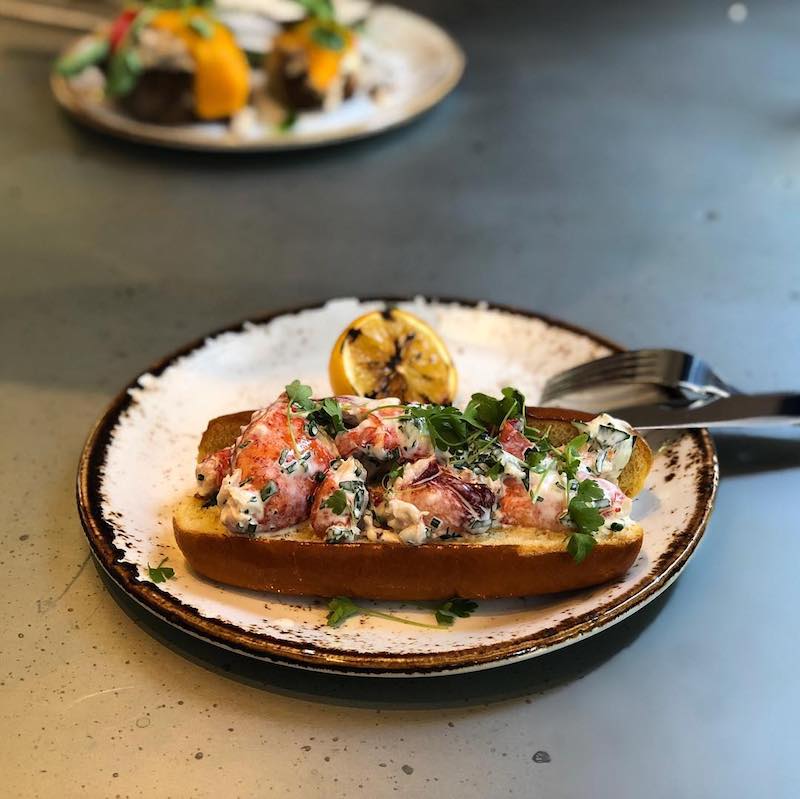 One of the highlights of the menu at Rappahannock is their lobster roll, with fresh lobster stuffed into a roll that could substitue as a pillow in a pinch. The lobster roll is a contentious topic in the seafood community, with each person claiming that a certain state does it best, but for Ryan and Travis, it's less about the where and more about the who. "We have to give top honors to Chef Nick Erven, who by state standards (California by way of Wyoming) may have a handicap, but knocks it out of the park at Rappahannock Oyster Bar DTLA," they said. "Second place goes to Chef Rebecca Charles at Pearl Oyster Bar in NYC."
We got Nick to divulge a few secrets behind this legenday roll. "You need the right ratio of perfectly cooked lobster, mayo, lemon, and buttery soft bun," he explained. "I'm sure people are going to say that I'm wrong, and a lobster roll should just be with drawn butter, but I love mayo way too much."
Erven also gave us his favorite spots around LA to dig into some seafood when he's not at Rappahannock:

Nick Erven: Michael Cimarusti actually sold his soul to the devil for powers to cook seafood like no other human on earth. Two words: Fucking lobster roll. Actually, thats three words, but Im sure you can edit that out. [Sorry, Nick.] He also possesses these superpowers at his fine dining stalwart, Providence.

NE: My wife has an unhealthy obsession with lobster rolls. Sometimes I'll find an image on Google or some other search engine (yeah, right) and send it to her in the middle of the night. When she wakes up it will be the first thing she sees on her phone and she will think about it all day. I do this so she takes me to Blue Plate Oysterette for lunch. I love their vibe. Oysters, beachside breezes, rich Westsiders with expensive jogging stollers. Im in!

NE: The Reel Inn is on Pacific Coast Highway. If I could buy it I would. I love to go hiking in Malibu, then stop there for a beer and calamari. They always have amazing seafood related puns written on their sign. Here are some examples:
"I just carped my pants."
"I think the crabdriver was drunk."
"krill me now." 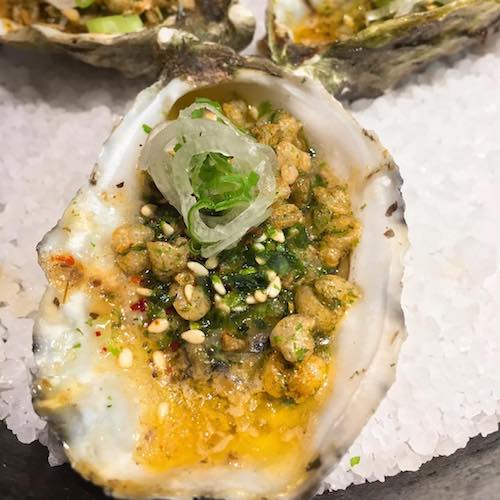 Connie and Ted's courtesy of @connieandteds 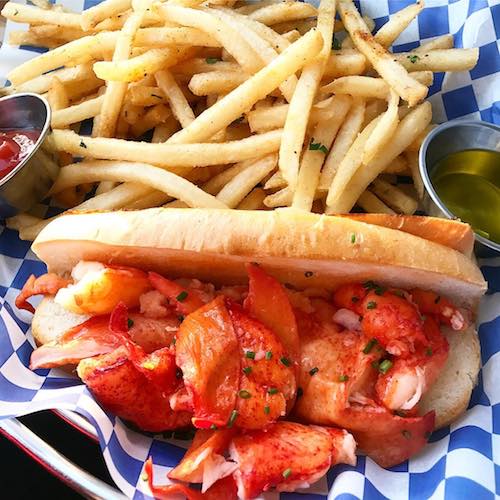 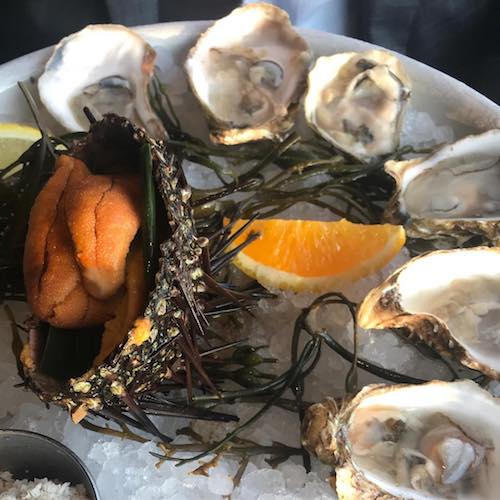 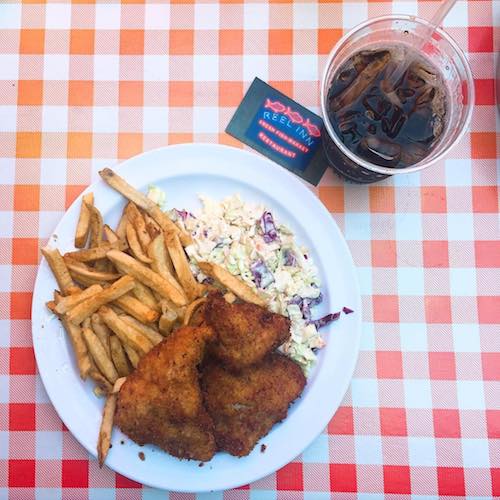