Artist by day and rocker/ barkeep by night, Sol Trece takes us on a raucous ride through her neighborhood.

Perfectly poised at the midpoint of gritty and hip, HLP—yeah, use this if you want to sound like a local— has managed not to succumb to the G-side (gentrification) ... yet. As one of LA’s most ethnically diverse hoods, Highland Park is also LA’s largest historic district and a haven for artists for over a century.
Tucked south of Eagle Rock and just west of Pasadena, HLP is where you’ll find a plethora of rare vinyl, one of the very last typewriter repair shops and an exciting mix of vintage and newborn restaurants and bars. Plus, it's home to comedian Marc Maron, where he churns out his weekly podcast from his garage. (Last summer, Obama even hung out at Marc’s place for an interview!)
Then there’s Sol Trece—bar manager of La Cuevita bar.
Born and raised between Uruguay and Brazil, Sol began working the bar scene at age 16 (gotta love those South Americans and their lax drinking laws). Some years later, she found her way to the US of A and fell in with the coolest kids in town, the 1933 Group (the company behind Bigfoot Lodge, Thirsty Crow, etc). In 2012—when the dive bar called Little Cave was transformed into an ‘old world Mexican grotto’ AKA La Cuevita—Sol stepped in and took the reigns.
Job in place, Sol, as part of Uruguay’s first all-girl punk rock band, also found a home with the The Vigils—a band that melds rock ‘n roll, 70s punk and new romanticism. And when she’s not making drinks or playing bass, she’s painting. Currently, she has an art show at DTLA’s  Hive Gallery & Studios.
So yes, she’s busy—but that doesn’t mean she doesn’t get out and about. The punk barkeep definitely knows what’s good in her hood, and we got her scoop on Highland Park. Read on for the best vintage, coffee, yoga, art, history and Mexican food in the East LA enclave. A local always knows best.
Get Citizine Updates Here

How would you describe Highland Park?

Sol Trece: You can basically divide HLP into the York side and Figueroa side. I think that the “York side” has transformed very quickly. Like dandelions. You went to sleep one night and when you woke up the next morning there were new coffee shops, bars, restaurants, yoga studios, galleries and specialized donut stores that had grown to full size. Something similar is happening on the Figueroa side, but I think it’s happening a little bit slower with a bit more conscience and intention in keeping to the essence and spirit of the place. However, overall I think it’s doing well at keeping the best of both worlds. I love it that we are close to everywhere yet it still feels like its own separate island.

ST: Within walking distance to La Cuevita, you can find great record stores (with obscure selections), vintage shops (I love The Bearded Beagle!) and many places to have a bite or a drink.   Fashion 21 is still standing with a (thankfully) not very attractive exterior, but it’s the original Forever 21 store, if you’re into that. 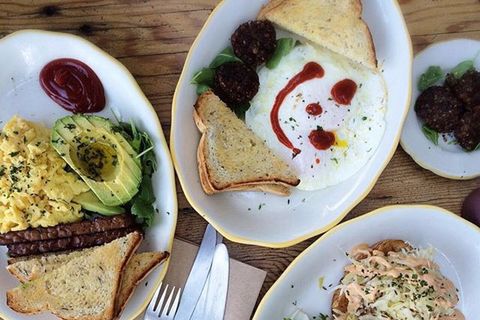 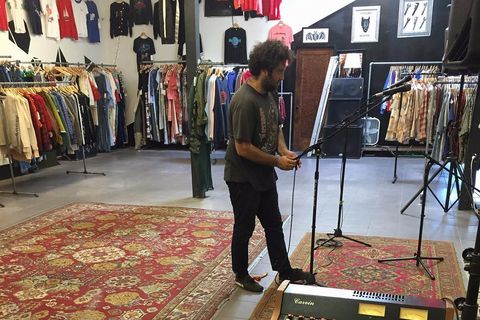 You could have your whole day’s activities planned around just a few blocks. You can go to Yoga at Kinship Yoga, shop at the Old LA Farmers' Market on Tuesdays, sip a coffee, grab a bite, shop for records, clothes, watch a movie, see some art (check out Avenue 50 Studio, Inc.) and wave at Chicken Boy above Future Studio Gallery on your way home. 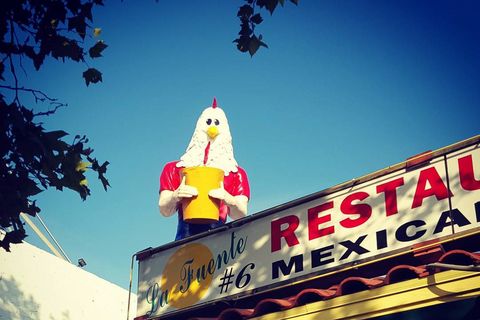 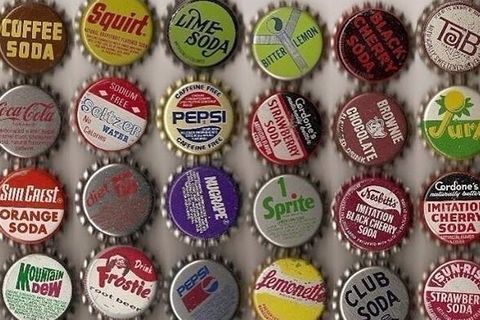 And if your typewriter is malfunctioning you can take it to the US Office Machine Co, that somehow still operates, and then head to York and begin your York side tour by stopping at Galco's Old World Grocery store where you’ll find yourself in Willy Wonka’s land of sodas.

ST: I do enjoy running by the Arroyo Seco river. (You can enter through Ave 60 by the dog park). Although the best running/biking area is further down where Figueroa becomes Riverside (in Frogtown) where you can peacefully run by the river. I’m grateful for the Highland Theatres that shows good movies for cheap. I’d probably have un jugo energético at Tropical Juices on 57 or a mangoneada at La Palapa….. or maybe a coffee at Cafe Aroma or Tierra Mia Coffee  or…or… I haven’t been to Civil Coffee yet, so maybe I’ll have it there.
There’s also NELAs artwalk on the second Saturday of the month, which brings me to what I’ve always appreciated the most about HLP.  It’s the large amount of artists, crafters (HLP was at the helm of the 30s’ Arts & Crafts Movement), musicians and overall creative people that have made the area so appealing. I believe that what I enjoy the most, especially working behind a bar, is meeting so many different types of people. Old and new to the neighborhood.
Going for a bike ride and looking at the beautifully crafted houses in the area is also an uplifting activity. Watching houses being “reborn” is also quite fun.

What are your favorite places to grab a bite?

ST: I enjoy dining at Good Girl Dinette, and when I have the patience to stand in line, grab something from Kitchen Mouse. I love their sidewalk seating, their menu and everyone that works there. 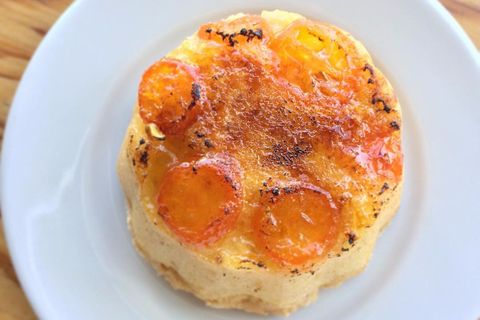 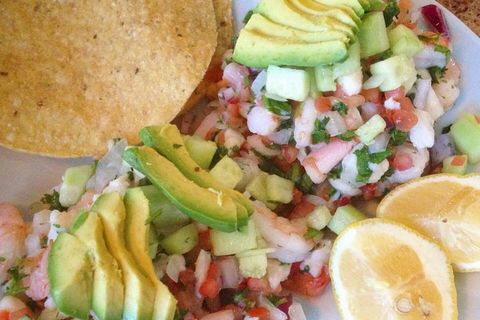 Las Cazuelas and El Pescador  are good places to eat as well. But it’s probably La Estrella that feeds me the most since it’s one of the only places still open by the time we close!

Dring to order at La Cuevita?

ST: I would order straight mezcal. We have a extensive and diverse selection, and we all love it. On the cocktail side, I’d recommend the 43rd and 3rd   (Buffalo Trace, Licor 43, Carpano, bitters, absinthe rinse). It’s well-balanced and interesting. I love this drink. Then there’s the Malditos Secretos (El Silencio, Ancho Reyes, Jamaica flower, lime, agave) which is a nice balance of sweet, and a tiny kick of spice. It’s a great mezcal intro drink for those who haven’t had it yet. Finally the Mezcaladas (Housemade spicy michelada mix, Corona, El Silencio Espadin) all served in a pint glass that has been rimmed with a housemade smoky salt (black lava salt macerated with Islay single malt scotch!).
Get Citizine Updates Here

Sol Trece: There’s so much I like about it!! But what I like the most is the eclectic mix of people that come every night who have been coming for years. Also, you can sip on mezcal or order a specialty cocktail, a Jager Bomb or a Sazerac, and no one would judge you either way! 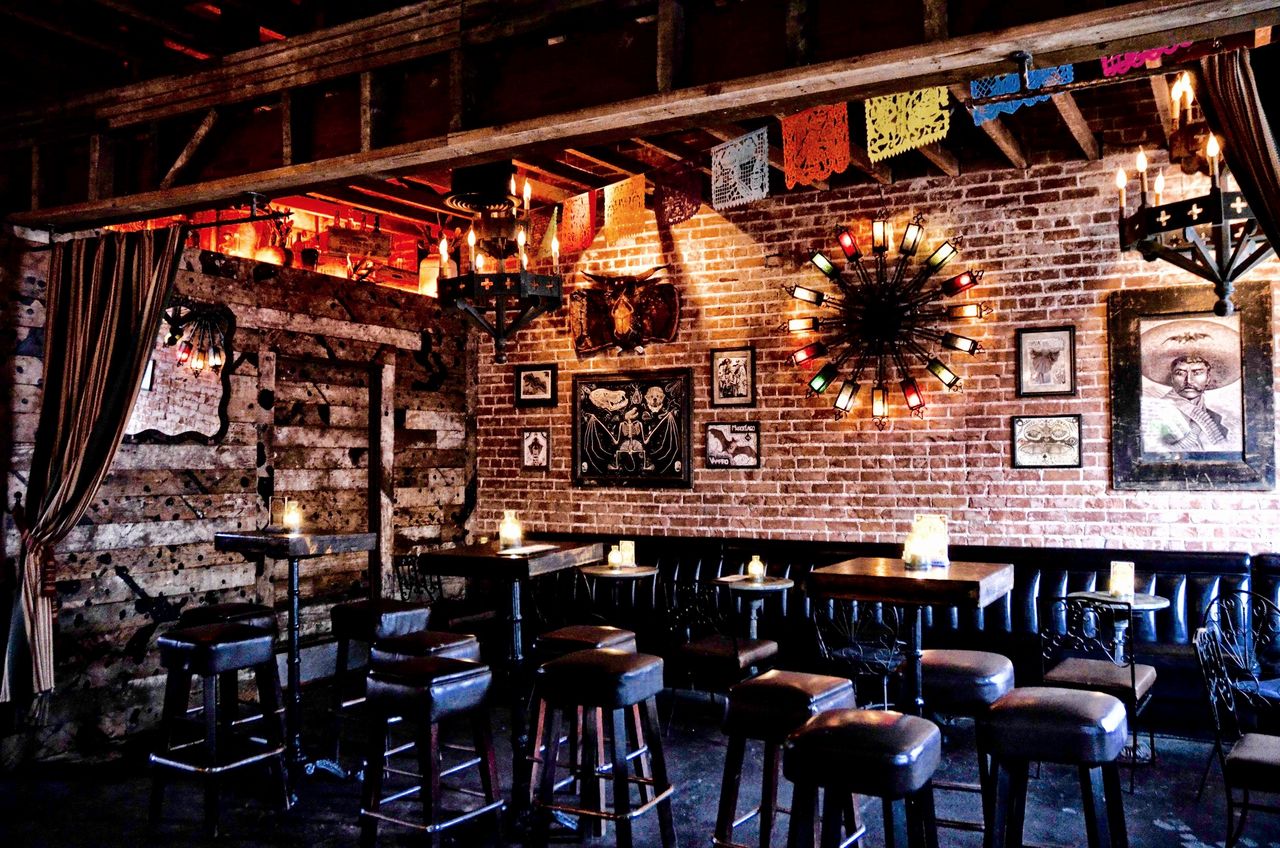 ST: Great place. Really friendly and unpretentious with a great beer selection and fun people behind the bar. 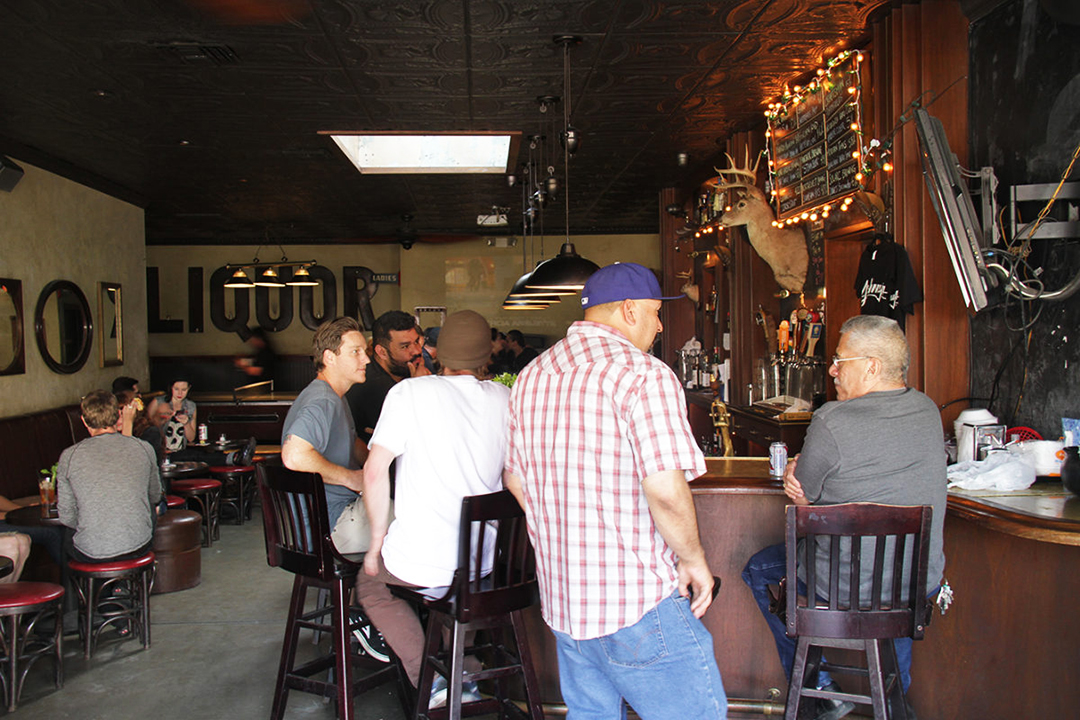 ST: A good place to go for a drink and a bite. Good for watching sports too. Especially if you go for their “blue hour” specials — any time the Dodgers are playing. But they do have some good everyday specials as well. And their staff is very friendly. 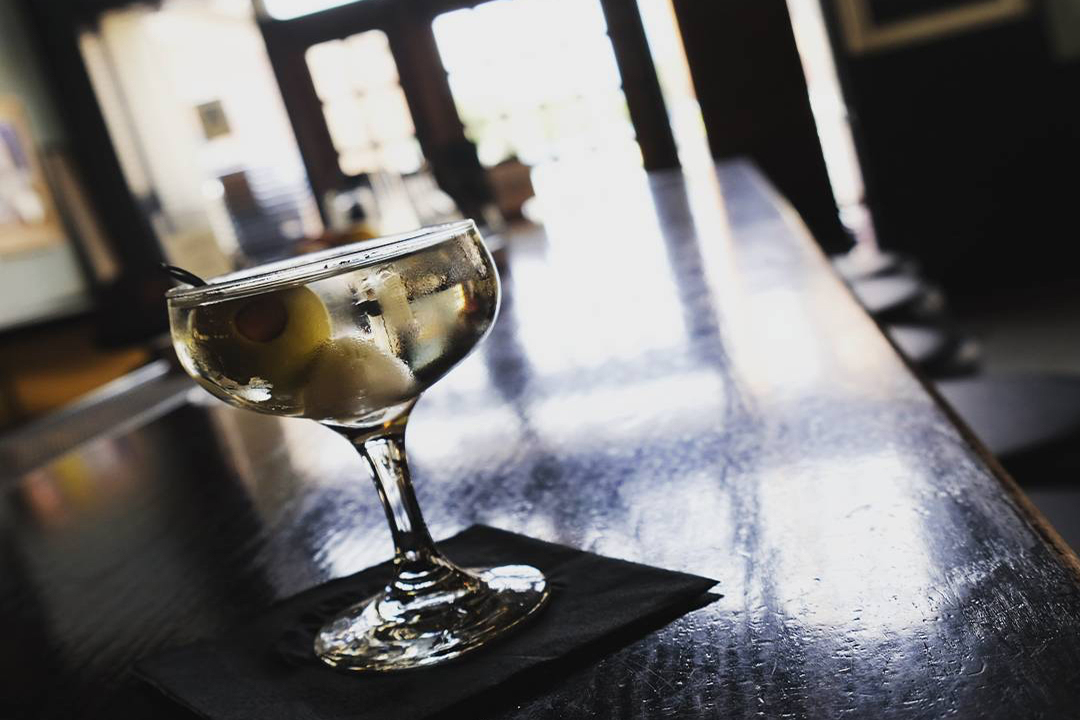 The Greyhound. Image courtesy of @thegreyhoundla

ST: A really good looking gastropub that has a great food menu and a great beer selection! 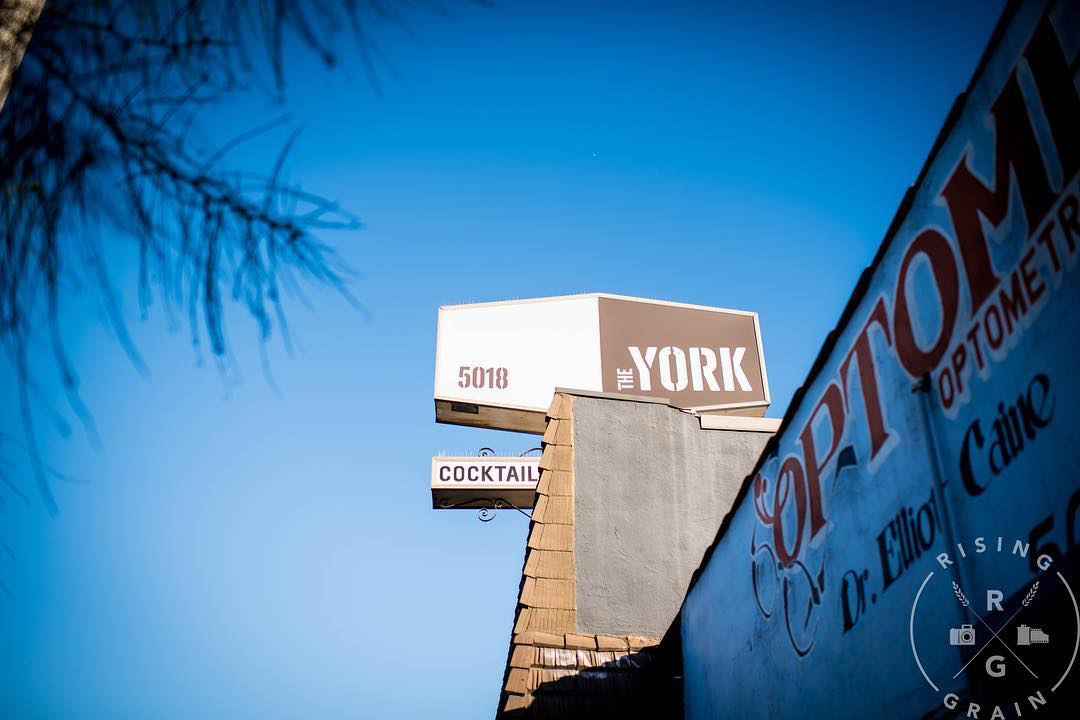 Exposure drag night at The OffBeat. Image courtesy of @exposuredrag

ST: This used to be the old Billiards place and is now the only live music venue on York. Other than a random show in a record store, gallery or bar here and there or in someone’s backyard, we weren’t getting much in terms of live music previously. 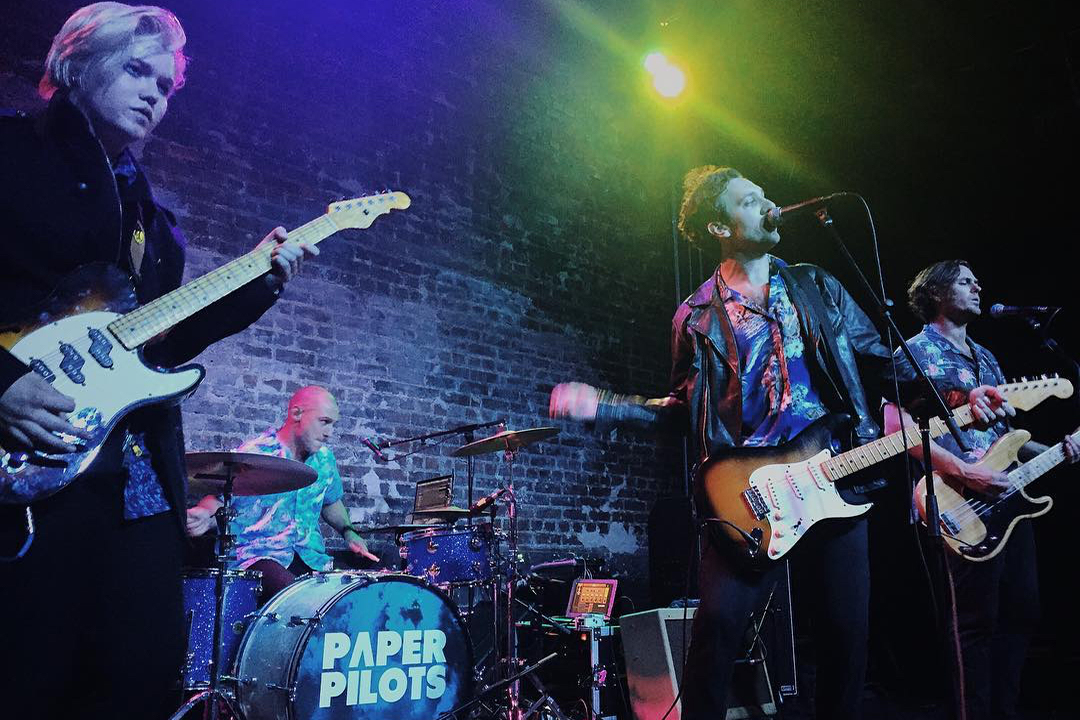 ST: Our sister location! When it was Mr. T’s, it was a real music institution. It was one of the first places I got to play in LA and it has a special place in my heart. Highland Park Bowl is now the only official place to see bands on the Fig side of Highland Park. 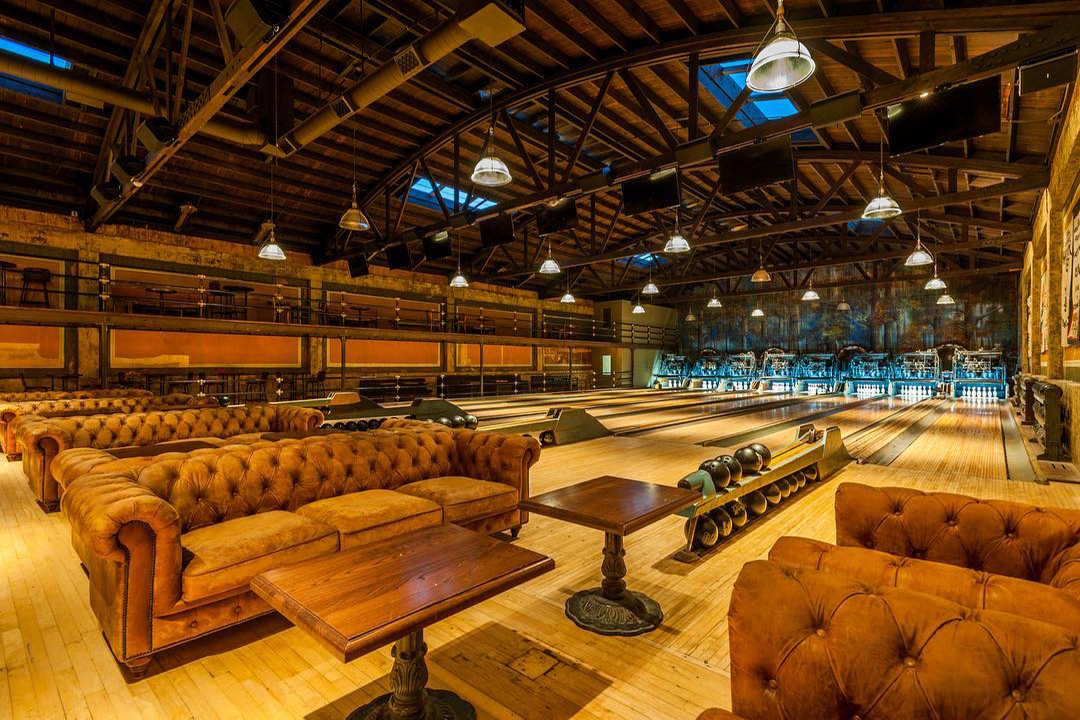 Belinda Gosbee is an Aussie writer, actress and coffee snob based in Los Angeles. Follow her jaunts on twitter @belindagosbee or instagram @gos22
Featured image courtesy of 1933 Group.